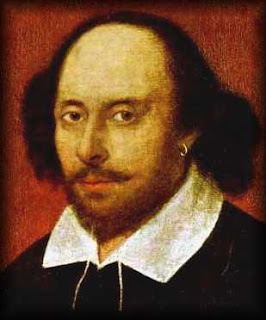 I was 10, it was my birthday, and was in the middle of a severe case of food poisoning (been in bed for just short of a week), when my godmother offered me a bilingual version of "Romeo and Juliet". I've heard about it, and have seen some japanese animation based on it on some random Saturday morning, but that was the first time I read it. Not in English, but still. My first contact with Shakespeare, the real thing. Weeks after I have a vague recollection of retelling the story, over excited, to some friends at Sunday school. And I was the only 11 year old that could spell correctly the surname. Shakespeare. Shakespeare. William Shakespeare.

I wanted to be a writer then. A few years later, a film director. At high school, a playwright. Saw "Shakespeare in Love" with my best friend, both went obsessing about Renaissance English for the good part of school years. We found the Wordsworth editions of the works in a near bookshop, about 3 euros each, and started buying it. My first one was "Anthony and Cleopatra". Reading it in the original was very, very hard. "Thou", "thee", "says't" are not exactly the kind of things you learn about in English class, but our teacher was kind and took some minutes after class to explain to me and my friend what they meant.

My most magical moment related to Shakespeare is from those times. We found out that "The complete works of William Shakespeare in 97 minutes" was showing at the city theatre, one night only. It was sold out. But we still convinced our parents (we were both 15) that we would get tickets, and off we went, two hours before show, hoping for someone to give up.

Twenty minutes before show, it looked hopeless. Loads of people were around, waiting to enter, and me and my friend sitting in the cold steps leading to the entrance, looking gloomy. We started to consider, what if there was only one ticket spare? Which of us "deserved" it more? People waved tickets in front of our teenage noses, not knowing the temptation they were causing in our usually very honest minds.

Everyone entered. We knew we would have to call someone to pick us up, and go home, defeated. But none of us could gather the strength to do it.

And we heard a voice.

Someone saying, "we should try to return these two tickets then".

Apparently a girl fallen sick, and her friend went with her to the hospital. Which meant, me and my friend went in. Saw it. Loved it. And came out true bardolaters.

I'm in London now, making use of my very own lost years. Almost half the books I have in my room are about Shakespeare, or his times. He feels like home, something to clean up my mind from the bad things of the world.

And in the corner of my desk, my skull smiles.
Publicada por LadyS à(s) 9:50 da tarde

Bad things of the World will always be, the most important is what we are doing to impact on it positively. Be that positive change.